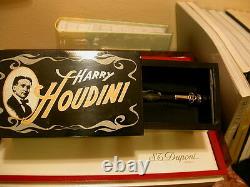 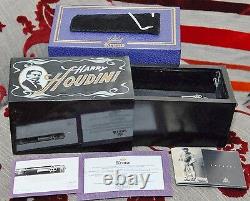 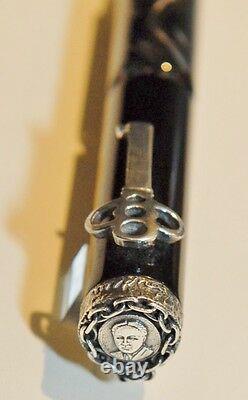 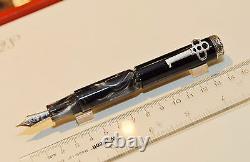 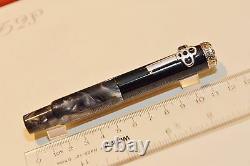 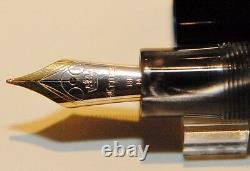 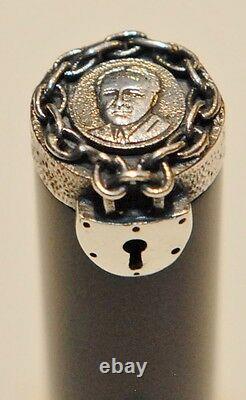 KRONE HARRY HOUDINI FOUNTAIN PEN - BRAND NEW # 376/588 EXTREMELY RARE! ONLY 588 PENS WERE CREATED AND THIS IS NUMBER 376!!! IT IS A VERY INTRIGUING PEN TO HAVE, SMALL WHILE CAPPED, IT HAS A DECENT SIZE WITH CAP POSTED. MEDIUM SIZE 2 TONE 18K SOLID GOLD NIB, BEAUTIFULLY CRAFTED BY HAND.

THE PEN COMES IN ALL THE ORIGINAL OUTER AND INNER BOXES, COMPLETE WITH ALL THE SERTIFICATES, BOOKLETS, BROCHURE DESCRIBING HOUDINI'S ACHEIVEMENTS AND THE MAKING OF THE PEN. PLEASE SEE THE ORIGINAL PICTURES OF THE ACTUAL PEN FOR SALE. BELOW IS THE DESRIPTION TAKEN FROM THE KRONE WEBSITE.

CHECK MY FEEDBACK BY A LIST OF SATISFIED CUSTOMERS WORLDWIDE. He jumps into the cold sea, manacled and chained. The weight of the chains causes him to quickly sink to the ocean floor.

There, he is out of reach-out of contact. They are unknowingly participants of his act.

The seconds move like minutes; the minutes like hours. The crowd sighs relief, and the myth becomes real.

The most famous magician there has ever been, and probably will ever be, was best known as an escape artist. His relics, letters, and photos are sought after by collectors and have fetched astronomical prices at auctions worldwide. Handcuffs were Houdini's specialty. He had 15 types in which he specialized. Opening them with keys and picklocks was his most common method.

The "key" is linked to Houdini for what he is best known. Krone has procured a small cache of these exciting keys that have impeccable provenance.

The keys then made their way to a well-known collector/dealer residing in a small town in Texas. Krone confirmed this magical link to Houdini, and verified the key's authenticity through a famous internationally recognized relic dealer from Connecticut. Because there are so few of these items, and so many will desire to own a magical key, several of the keys have been reduced to "magic powder", and are incorporated into the.

925-sterling silver clip in all of the limited edition pens. The Houdini Pen is a worldwide limited edition pen; 588 pens in sterling silver, 18 pens in white gold and 8 pens in platinum. Krone is proud to offer a very limited number of special reserve Houdini Pens, which are magical masterpieces in and of themselves, accompanied by Houdini's own antique keys. Of the 588 sterling silver pens, 118 of them are accompanied with an authenticated original Houdini key. All of the white gold and platinum pens are accompanied with one of these keys.

Gold nib, onto which the Krone name is proudly guilloched. Krone nibs are offered in three widths (F, M, B) customized to the owner's writing style. The clip contains the magic of Houdini's keys. The sterling silver used for the clip has been combined with actual authenticated keys from Houdini to create this unique collectible. Houdini's portrait has been engraved in.

925-sterling silver on the top of the cap. Framing Houdini's portrait is a chain and padlock in. Each pen is presented within a black lacquered, magic, Houdini draw box. For those who possess the magic, the box when opened will create the illusion of the pen appearing and then disappearing.

YOUR EMAILS ARE WELCOME AND ENCOURAGED. Add a map to your own listings. The item "KRONE HARRY HOUDINI FOUNTAIN PEN BRAND NEW # 376/588 EXTREMELY RARE" is in sale since Monday, May 22, 2017. This item is in the category "Collectibles\Pens & Writing Instruments\Pens\Fountain Pens\Montblanc". The seller is "mika13" and is located in Los Angeles, California.

This item can be shipped worldwide.